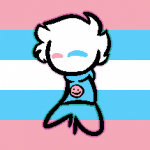 I'm not all that good about talking about myself, but I can try.
I'll give you the basics. I'm a wikia drfiter, I go from wikia to wikia and try to find a place to settle down. If you see me on your wikia, I'm probably just checking the place out.

What's your name?
most people call me haze

Single?
nope but he doesn't really have a wikia account. like he does but he's not active on it. at all.

Oh. Well. Do you have any hobbies?
yeah actually, i draw stuff. a lot. it's kinda like one of the only things i ever do.

Cool! What do you mostly draw?
MLP and what not. i can draw humans too, i just dont like stepping outside of my comfort zone too much. i'm a furry diaper baby about that lmao

What's a furry diaper baby,,,
lmao. it's a funny way of saying someone is a sissy or smth. the discord server i frequent uses that a lot

What do you use when you code?
,,,,code. i use code. if you mean what editor do i use, i use the classic editor under the source tab. it lays out all the code in a script fashion and makes it a lot easier to use

Why do you do the "fdjkdjk" thing?
it's called a keyboard smash. i do it when i'm laughing or expressing intense emotion. like. "my backspace is being weird jkfdjkfd"

Hello! You've probably clicked this because you were curious about my wikia abilities? Great! Hope I don't disappoint.

Coder Resume
I am skilled in both JS coding and CSS coding, as well as Chat CSS and Chat JS! I have a long history of helping users with their profiles and helping out wikis with things such as templates, and wikia pages. As you can see, based off my own profile, I have a wide variety of skills in CSS. JS is a bit tricky sometimes, but it's nothing I can't do. Feel free to ask me any questions on what I can/can't do!

Moderation Resume
I have been a mod on several wikis, and was even the owner/Head Of Command on another wiki for roughly a year. I am currently a moderator on a discord server with over 100 users. I normally run an admin position when I am a moderator, but I can handle any spot just as easily as a higher up place. Again, feel free to ask me any questions.

When I was younger I didn't have lockers.
So instead when I had a secret crush I would always write a note to them.
And instead of showing them to you,
I shoved them down into my bag,
in hopes that you not knowing who I was would never come ask me what I was hiding.
I built paintbrushes out of the tiny hairs that stood up every time I saw you.
Used these brushes to paint a tidal wave of words and emotions I would never show you.
I dipped these brushes into a pool of I hope one day this will come across to you.
If you've ever had a secret admirer I can tell you right now that it was someone just like me who loved someone just like you.
That there was someone out there who wanted to tell you how much you really meant to them.
That there is someone out there who wants to tell you that every second they spend thinking about you is just another distraction from all the hard times.
We've saved up pennies and nickels in a blind hope that our very first date would be with you.
We'd give up video games and comic books to be with the one we loved, I promise you.
Even as we grow older our thirst for your love continues as we cross the deserts of "maybe".
Believing.
Hoping we will find an oasis of yes.
Yes.
We probably should've just said something to you.
Stood up and let you know how we felt.
But we were chicken shit.
We let our weak little hearts explode from our chest as we watched you walk on by.
So, I guess what I'm trying to say is,
we never meant to turn our hearts into garbage bins.
It was an accident.
And I know the news headlines about us quitting on you were simply a misprint.
Or bad reporting.
I know we've been boarding up our hearts to you from the outside in.
But we did it because they told us to let you go.
And I know we've gotten into the habit of throwing everything away for you.
But our heart is like a door knock.
And every time it beats.
It's just your way of asking.
"Can you please come out and play?"

Are you left or right wing?
Uhhh i try to stay in the middle but i'm more right leaning honestly, though i agree with a FEW left wing ideas

Are you a anti-feminist?
i'm a anti feminazi. i don't support gender superiority. women are already equal in the eyes of the law and hate to break it to you, but not everyone is gonna respect everyone so ¯\_(ツ)_/¯. however, i will support a egalitarian

Neo-Nazi!
okay all jokes aside that was a stupid made up term for the left to use to support a flimsy argument so they could keep using their catchy "nazi" term so no miss me with that

If you're someone who doesn't support everyone for who they are, then you're a Nazi. Get with the times the meaning of Nazi isn't the same.
....no the legal meaning of a Nazi was a German solider who worked under Hitler and his rule. It was basically a society. If you ever see me attacking people for their race or demanding that people shouldn't be alive because they aren't big boned, white, and don't have blue eyes and blonde hair, then you can call me a nazi. but until then? dont.

How many genders do you think there are?
Two. Male and Female. You can only be born as male or female, and you can only identify as male or female. I no longer believe in the "gender binary" thing, as there is no proof that a gender nonbinary brain actually exists, (such as there is proof a trans brain and a cis brain exists). And I don't take peoples "feelings" as a sign that something exists. People's feelings can change and they often change several times throughout someone's life. HOWEVER, if someone chooses to identify as gender nonbinary, I will still respect their prefered pronouns.

I heard you're gay. Does that mean you're LGBTQ+?
no i'm not. i dont want to associate with them because of what the community has turned into.

Do you accept ace people?
???i accept everyone for who they want to be. i may call it stupid and laugh at it, but i won't go out of my way to be anymore of a dick about it. and, considering my boyfriend is ace, i'm okay with them. i don't fully understand it, but i'm okay with it.

If there's anything you want to discuss with me, or attempt to change my mind on, then feel free to PM me on the chat. Don't message me on my wall because I won't discuss these things publicly. But PLEASE do not attempt to argue with me if you are not willing to back your arguments up with facts. I will always cite my sources and link back to articles, stats and other things to support my side of the arguments. Make sure your information is up to date too. If you send me an article that's from like, 2007, and I find another article with new and updated info that goes AGAINST your argument, then I will for sure point it out.
And please remain civil. I will remain civil as long as you do. Thank you.

Please do not take my code without asking me first, even if you credit me.

Retrieved from "https://the-demons-light.fandom.com/wiki/User:Hazerino?oldid=116000"
Community content is available under CC-BY-SA unless otherwise noted.