Euclid is a planet created by the deity Xeren and the main setting of The Demon's Light. It consists of five distinct continents surrounded by an ocean. Euclid has a population of approximately 375 million humans. Prior to the Great War, Euclid was a thriving planet with 8.7 billion humans. 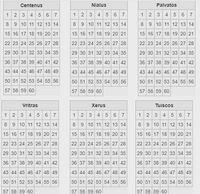 The calendar on Euclid is split into six months, each named after a Power and with sixty days. Due to this, a year lasts 360 days.

The Euclidean calendar is typically split into two dating eras:

The regions of Euclid consist of the five continents and the cities across them. Small islands, sea stacks, skerries, and cays populate the planet's oceans.

Hala is one of the most inhabited continents, home to seventy-five million people. There are three regions in Hala: the desert, the lush flatlands, and the mountainous taigas. Southern Hala, with a population of five million, is made up of mostly desert, and is very barren and harsh. The flatlands are the most populous area of Hala, with lush green forests and fields. The capital, Ku'Yoki, named for the continent's leader, is located in this region.

It is led by Ki'Yoki, a cambion.

Muné is the most war-torn continent, a large portion of it being under demon control. It has a population of twenty million humans, sparsely gathered in the few remaining towns. Located near the northern tip of the continent is the Smithson-Reed Ferry, periodically transporting people to Aiola as part of a humanitarian effort.

Much of Muné is dense rainforest. The continent is known for its erratic climate and exotic features originating from Eden. Weather patterns shift wildly, with blizzards and electrical storms often happening in the warmer months. Packs of birfi, a large species of bear from Eden, are commonly seen.

Traveling through the continent is extremely dangerous. Headre is a large town of skinwalker demons. The large Blackwell Forest is home to the infamous demon Crolak. Thousands attempt the journey to the Smithson-Reed Ferry each year in search of safer lives.

Nuyö is the hub of most demon activity on Euclid. Two nations in Nuyö, Vilebluysk and Mesto, are part of the Nuyö-Dyavol Coalition. The Nuyövian nation of Stvitel is the only country on the continent to be part of the Global Union. Numerous trade routes between Nuyö and Hala strengthen the two continent's economies. Prior to a recent revolution, Stvitel was known as 'Rodina' and was the center of intellectual study in pre-war Euclid. Pre-war Rodina was known to host many aristocratic families, such as the Arsene dynasty, many of whom were presidents. Gabriel Arsene was a scion of this family. The nation was also the birthplace of Mirek Koval, the founder of the Global Union.

The continent was known to have a very cold and inhospitable climate prior to the Second Great War, but became temperate and, in some regions, tropical due to the reality altering effects of the war. Flora and fauna from Eden has been introduced to Nuyö to great success, strengthening the continent's weak ecosystem. Dragons, an intelligent species of animal rarely seen throughout Euclid, are not uncommon in Nuyö, where the mountainous peaks greatly resembles their Eden homes.

In many regions of Nuyö, even outside of the Nuyö-Dyavol Coalition, demons and humans live in relative harmony. Demon culture has merged with Nuyövian culture over the centuries, and the two are hardly distinguishable. To some, the term Nuyövian is synonymous with light-skinned humans. During the First Great War between Nuyö and Thales, many Nuyövians migrated to Thales.

Thales is the birthplace of many of the characters in The Demon's Light, and the setting of all Season One episodes.

The continent has many notable locations shown in the series, such as Port City, the Alchemilia Corporation Gladea building, the Laboratory of the Unexplainable, Plant Empire, and various others.

The Global Union phoenix is the official currency of the association. It was created to ease issues of commerce between the various member states. The phoenix is the most-traded currency in Euclid, although some territories continue to favor their own local currency. Most alternative currencies within the Union's area of influence have a fixed exchange rate with phoenix, including the Sampian bill (of which it is modeled after.) An exchange rate for Liang and Altyn are used for former Coalition holdings which have been taken by the Union, although the Coalition has not recognized it as legitimate.

Altyn is the official currency of Mesto and Vilebluysk. In use for hundreds of years before the arrival of demons, Altyn was created during the reign of the legendary king Alexander. Altyn is officially exchangeable with Liang and, as mentioned above, an exchange rate for phoenix exists but is not recognized by either country of origin.

Liang was made by the government of Ki'Yoki as a replacement for traditional Halan money and the Union phoenix.

Under Vritra's rule, demon slaves could receive rewards if the amount harvested in a day was of a certain weight. Angel overseers who had overseen a demon workforce which produced an incredible amount would often gain a higher social status. This system continues in angel prison camps. A variant is also used by some units of the demon army wherein the product of a day's work is measured by number of kills and amount of enemy land taken. The reward is either given to an individual soldier or divided among a unit if preferable. Unsubstantiated rumors that the wings of angel commanders can be exchanged for promotions have abounded.

Humans were the dominant species on Euclid prior to the Great War, where angels and demons from Eden invaded. The human population has been substantially reduced in most of the world, with certain exceptions. Hybrid species are uncommon, but not unheard of.

Other native animals include catulus, chicaro, and leviathans. Native plants include Gladean Oaks and Halan Firs.

Due to the culture of Euclid, religion is a sparse thing, often held by "fanatics" and those disenfranchised with the order of the universe. Most religions are practiced in small organized groups:

Community content is available under CC-BY-SA unless otherwise noted.
Advertisement